You are at:Home»Pregnancy»Prenatal Care»10 Foods To Avoid During Pregnancy 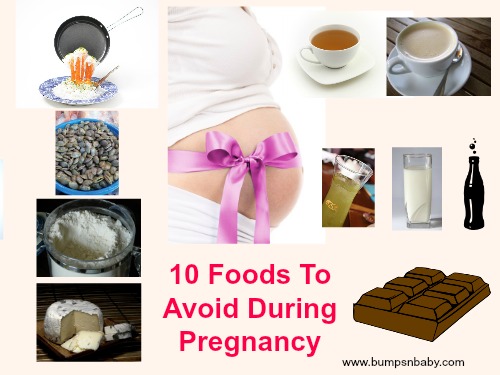 This post is about the 10 foods to avoid during pregnancy.

The whole nine months for a pregnant lady can be tiring. As soon as the initial phase of difficulties vanish by the second trimester, food cravings, leg cramps and backache arise.

There are food items that shouldn’t be consumed/ to be taken in moderation by a pregnant woman as they could pass on to the baby as well causing harm to both.

The general category of such foods include caffeine, colas, aerated drinks, liver, fish having high mercury content and others.

Let’s take a look at the foods to avoid during pregnancy one by one.

Foods containing caffeine should not be taken or restricted to 200 mg/ml a day which is equivalent to 2 cups of instant coffee.

Pregnant women who consume more than 2 cups of coffee or any other caffeine product are found to deliver low weight babies / suffer miscarriage. So its better to be safe than sorry.

Fish having high mercury content like shellfish, king mackerel, swordfish etc should be avoided as it can cause mercury poisoning.

It would be better if food containing raw fish like sushi is avoided.

Raw salads / salad dressings like Caesar salads should be avoided as the raw eggs are used in it .

Personally I dislike maida. The non fibrous by-product of wheat affects the proper functioning of intestines.

Raw milk which is not homogenized or pasteurized should not be consumed by a mom to be to reduce the risk of still birth, pre term delivery and meningitis in new borns.

The harmful bacteria Listeria is found in the raw milk.

7. Cheese made from Unpasteurized Milk

Soft cheese like blue cheese, feta etc if made from unpasteurized milk should be avoided by mom to bes.

Green tea should not be taken in excess by pregnant women due to the caffeine content.

For the same reason caffeine, cokes and colas should be avoided. Alcohol consumption is to be avoided during and after pregnancy.

The intake of chocolates should be in moderation as well.

Chocolates should be limited or avoided for 2 reasons – caffeine and high calories resulting in more gain of weight during pregnancy.

Hope you liked this post of foods to avoid during pregnancy.

What did you crave for when you were pregnant ? Do share with us in comments.