You are at:Home»Kids»Health»Symptoms of Malaria in Kids You Might not Notice

What are the sure shot symptoms of malaria in kids?

Does your little one have malaria?

What are the signs of malaria in children?

My child’s fever keeps recurring, could it be malaria?

Can it put my child’s life in danger? 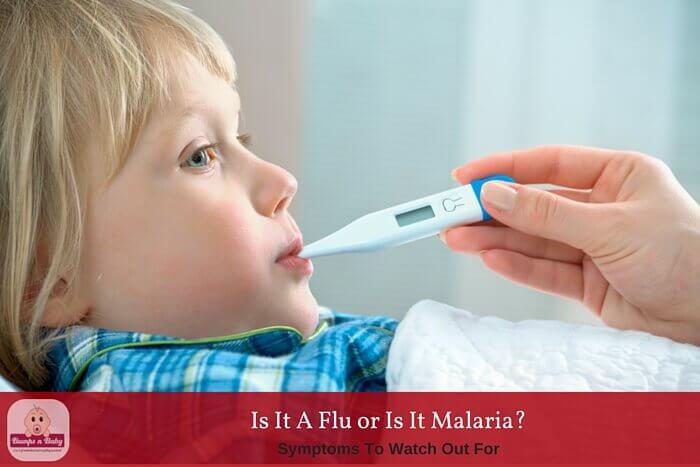 Malaria is an illness that can zap the strength of adults, so imagine the plight of kids. I remember my dad going through a bad bout of malaria.

For me, he was the strongest person in the world and nothing could fluster him. But when I saw what malaria did to him, I thought that it was the worst disease that you could ever get.

Now that I am older, I wonder how it could affect the little ones. Even if they are down with something as small as a common cold it can make our hearts ache and make us sick with worry.

It is quite easy to get confused between the symptoms of malaria and high fever. Kids are often unable to explain their symptoms and babies rely on us. So how do you know if it is just a fever or if it is something else? We will help you find out.

Malaria is a disease that is caused by parasites and it is spread from one infected person to another through mosquito bites, anopheles mosquito to be specific. The severity of the disease depends on the strain of parasite causing the illness.

Although this is the most common way a person gets the disease, there are rare instances of it having spread through

If you have accepted blood from a donor who was suffering from malaria at the time of blood transfusion.

Just like in blood donation, if an organ donor is affected with malaria, then the person who gets that organ can also be affected.

It is mandatory that you use disposable needles for injections and anything that involves the use of needles. It is not just malaria that you have to be worried about, sharing needles can lead to making your body susceptible to various ailments.

When a mother passes the disease to her unborn child.

Malaria is a curable disease but in children younger than 5, malaria can be serious. Mosquitoes that are carriers of the disease are known to bite at night.

You can read about the 10 ways to protect babies from mosquito bites.

When does malaria become rampant?

It is interesting to note that fewer cases of malaria have been noted in hilly areas of the country making this more of a tropical disease.

Does that mean others won’t get it? No, it’s a small world.

A person who has been to a place where malaria is rampant can carry it back to his hometown!

When do symptoms start to appear?

The symptoms of malaria do not occur the moment right after your little one is bitten by a mosquito. The incubation period of malaria can differ depending on the type of parasite that has caused the illness.

The symptoms can appear in 7 days. At times the gap between the time of exposure and the appearance of the symptoms can be a whopping 8 to 10 months in the case of certain strains!

Symptoms of malaria in kids to watch out for:

As I said before malaria is difficult to diagnose due to the similarity in symptoms. It is very easy for you or at times the doctor to dismiss it as a normal fever. So make sure you keep an eye out for all the symptoms and update your doctor so he can diagnose your child correctly.

The symptoms of malaria presents itself after 10 days to four weeks after the parasite enters the bloodstream.

Malaria in children 5 years of age can be really severe so you can’t make mistakes. The symptoms of malaria in small kids can be different from that of older kids and adults.

Now let us look at the most common symptoms of malaria in kids.

This is the symptoms that can throw you off the track. A high temperature doesn’t always mean a normal fever, it could also be the sign of a serious infection or disease and in this case, malaria.

This is yet another symptom that can cause you to think that all is well. But don’t worry, there are other symptoms to keep an eye out for so that you know what you are dealing with.

This is a symptom that most patients of malaria has had.

Kids can be moody at times but a sudden irritability coupled with drowsiness could be sign that he/she isn’t well.

While some kids appear drowsy, some others may find it difficult to sleep.

Stomach pain is a symptom that was seen in some of the patients.

Malaria can cause vomiting too. But it is easy for you to think that the stomach pain and vomiting is due to something he/she ate.

Malaria can cause pains in the joints, older kids will be able to point this out to you.

In some cases, patients did not have a high temperature, instead they were cold and clammy.

Malaria can cause your child to breathe fast.

No mom thinks that her child eats well. But before you jump to the conclusion that your little one is suffering from malaria, think. Does he/she have any other symptom mentioned in this list? If yes, then take a doctor’s opinion.

In some cases, the patients might have dry cough.

This how malaria manifests in children and adults. But in kids below 5 the symptoms could be slightly different. In such cases, the symptoms of malaria are as mentioned below.

Symptoms of malaria in children below 5 years:

The immunity given by the moms to their little ones help them to be able to withstand malaria during the first two months. But after that they become susceptible.

The fact that their immune systems aren’t strong enough makes it difficult for them and makes them more vulnerable than adults. Infants might not even show any symptoms. Often parents come to know quite late.

In small kids the symptoms of malaria are as follows.

Why are the symptoms different?

The symptoms vary depending on the type of parasite and the health of the person who contracts the disease. There are various types of parasites that cause malaria. They are-

A common complaint in older kids and adults are the cyclic fever and other symptoms. The parasites settle in the liver and the red blood cells. They reproduce and get released into the blood. The symptoms keep coming and going based on the life cycle of the parasite that has caused the disease.

But we can’t use the cyclic recurrence of symptoms as a fool proof of detecting whether it is malaria because the P. falciparum does not cause cyclic symptoms. The malaria caused by P. falciparum parasite can be serious and fatal in some cases.

How can you know if it malaria?

You know there are different types of parasites causing malaria, which causes different symptoms. But while the symptoms of malaria can be misleading, the method of confirming it is actually.

All it takes is a simple blood test to know if it is malaria. This blood test will also tell your child’s doctor, which parasite has caused the illness.

The pediatrician can determine the course of treatment depending on the results of the test. So with this one blood test you can determine whether your little one is down with malaria.

What happens if your child’s treatment gets delayed?

The confusing symptoms can often cause parents to shrug off any doubts and self-medicate their child. But even a curable disease like malaria can become life threatening if the treatment is delayed. If that happens then it could affect the brain and reach a point of no return.

How to ensure that your child doesn’t contract malaria?

You know the adage “Prevention is better than cure”? That is the best approach here as well. Whichever the strain be, they need mosquitoes. So we need to eradicate the mosquitoes.

Let us take a look a few tips that aid in malaria prevention for children.

If your child is tested positive:

Apart from the medicines, you can help speed up the recovery process by doing some small and easy things.

You need to ensure that your munchkin,

That parasite they are fighting will zap their energy, so they need to conserve all the energy they have.

A light but healthy diet rich in nutrients will help in his/ her fight against malaria.

Frequent sponging will help to bring the temperature down.

Precautions to be followed:

Malaria can be scary, but with timely intervention you can cure it.

Malaria in children, especially in babies and kids below 5 years of age can be serious. This is because their immune systems are still developing.

Apart from that symptoms don’t manifest itself as they do in older kids and adults. The symptoms are tricky to identify too. So if there is fever that doesn’t look normal, then take your child to a doctor.

Fortunately despite there being different strains of parasites that cause malaria, one blood test can determine whether your little one has malaria or not. If your child is diagnosed with malaria then ensure that you follow all the tips and precautions given above.

Hope you found this post on various symptoms of malaria in kids was informative.

Write to us in the comments if you have any doubts or queries.