You are at:Home»Recipes»Meals»Thari Kanji or Rava Porridge for Babies – Ramadan Special 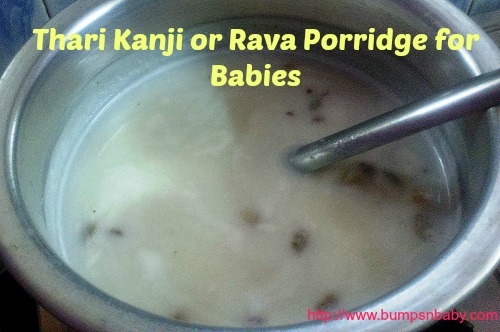 We were always invited by our neighbours during Ramzan time when they break their fast in the evening followed by the delicious feast . Fragrant biriyanis, the soft paper thin patthiris, porottas, succulent chicken, other fragrant meat curries , savoury payasams, dates, of course this thari kanii or rava kanji on the serving table. Thari kanji is similar to the rava porridge for babies 🙂

Thari kanji may be named after the ‘thari’ or ‘grainy’ texture this porridge has.

Infact thari kanji is served soon after the fast is broken with lime / plain water. Its believed that it helps to settle the stomach after the whole day of fasting when the blood starts gushing to the tummy area and prevents cramps.

Thari kanji or rava kanji had a typical aroma if I remember of fried shallots in ghee. Finely roasted rava is cooked well in milk, seasoned with salt and fried shallots.

This time Acchan made a different version of this kanji for his Ramzan fast (Yes he fasts during Ramzan time). The version is sweet and rich with dry fruits. I felt its the same rava porridge for babies, hence took pictures all the while he made the thari kanji. This rava porridge or rava kanji can be given for babies 1 year and above as its made in cow’s milk.

How to make sweet rava porridge for babies and toddlers?

Cook rava in milk without forming lumps. Continue stirring while adding sugar. Once the milk starts evaporating, stir on medium heat for a few minutes.

You can roast rava in ghee if required. 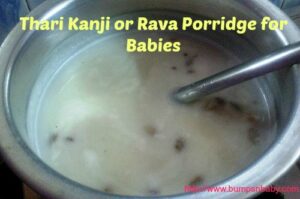 Print
Author: Sangeetha Menon
Ingredients
Instructions
Notes
1. Instead of sugar, you can opt for jaggery

2. You can also make this porridge with any fruits purees like banana, carrot, chikoo etc.

3. If you baby is less than 1 year old , you can make this in plain water (instead of cow's milk) sweetened with fruit purees.
3.2.2929
Do try out the rava kanji and let me know if your little one liked it or not.