Why do women have nausea and vomiting during pregnancy?

I can’t eat properly due to vomiting; will it affect my baby?

What can I do to get relief from morning sickness?

Morning sickness is one pregnancy symptom that majority of pregnant women will have to go through especially in the first trimester.

Here is a post all about morning sickness during pregnancy and how long it lasts! 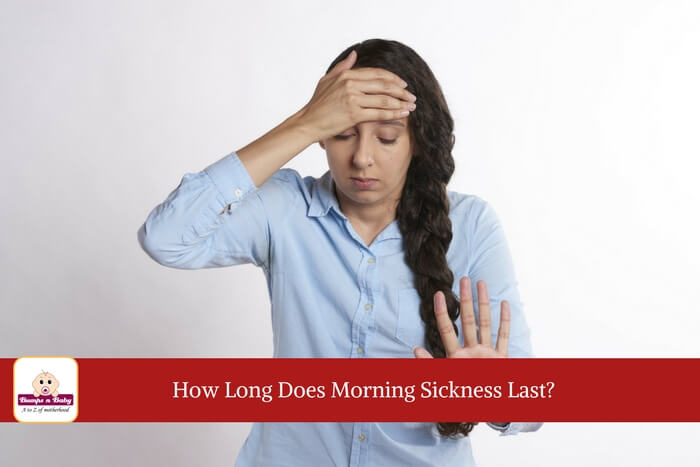 What is morning sickness?

Unlike the name suggests morning sickness doesn’t necessarily happen only when a woman rises out of bed in the morning, it may occur anytime in a day. That is the reason we call it a distorted term.

Some of you will be amazed to know that for a few women, morning sickness is worse in the morning and gets better over the day. While for others it may happen at any time during the course of a day.

The intensity of morning sickness varies from body to body. Vomiting during pregnancy is more often seen during the first trimester as compared to nausea.

When I fell pregnant, morning sickness was the very first symptom I faced. It triggered anytime during the day right from week 5 and I used to throw up everything I ate or drank.

Later weeks, it became so severe that my eyes popped out red and wet every time I puked. I had no option but to talk over with my gynecologist and get myself treated. After remedies didn’t work for me, I was prescribed to take the tablets an hour before eating to keep my gut strong and not throw up. The medication helped me ease the symptoms and eventually subside over the week 10.

Is morning sickness more for some pregnant women than others?

The degree of nausea and vomiting one has to deal with while pregnant changes from person to person and from pregnancy to pregnancy.

Some pregnant women tend to feel queasier while others have very mild morning sickness which doesn’t bother them at all.

You have a high chance of feeling queasier if:

Reports suggest that morning sickness during pregnancy isn’t a harmful condition for either mother or the baby. In fact, as per gynecological information, it is a good sign of placenta developing properly.

Moderate symptoms don’t harm the mother or the baby. Poor weight gain in the first trimester is also not a reason to worry.

Must read: Dos and Dont’s of Pregnancy: What To Do and What Not To

How long does morning sickness last in terms of nausea and vomiting?

According to the surveys, it is found that more than 50% women experience this symptom as they enter the first pregnancy trimester. Usually, vomiting and nausea during pregnancy begin somewhere around the week 6 of pregnancy and morning sickness goes away by around 12th to 14th week of pregnancy.

Having said so, for some women the symptom could occur right from week 4 of getting pregnant. Once started, it generally gets worse over the coming weeks and later subsides to feel completely relieved by week 14 of pregnancy.

In occasional cases, morning sickness during pregnancy could also last for an additional of 3-4 weeks more for the unsettled stomach to restore. Very rarely, for a few women, the symptoms come and go or may remain throughout the phase of pregnancy.

Read: Spotting During Pregnancy – What’s Normal and What’s Not?

Do’s and Don’t for getting relief from morning sickness

This one, among the very first pregnancy symptoms, feels exhaustive and depressed to many women and leave them thinking how tough would later months be when the start itself is so terrible. But don’t get too stressed on this morning sickness during pregnancy, there are ways to help you feel better.

One should talk over with the expert about tips on relief. Meanwhile, you may also practice the below measures:

Are there medications for morning sickness?

Nausea and vomiting during pregnancy can become miserable for many pregnant women as they can’t keep food and remain nauseated round the clock. When tips and suggestions don’t work, one should get in touch with concerned health care expert and start taking tablets as per prescription.

Hyperemesis Gravidarum is a state where in you experience weight loss, disturbance of electrolytes and severe vomiting and nausea during pregnancy. Most women mildly suffering from this condition are treated by proper rest, measures of diet and certain antacids.

However more severe cases might require medical attention and even admittance at the hospital. It is suggested to consult the gynecologist for right treatment at right time. Prolonged morning sickness may put the mother at the risk of low birth weight of the baby, pre-term birth.

You require medical attention if :

Morning sickness is one common pregnancy symptom that most women have to deal with. It is nothing to worry about and will not harm your growing baby. Nausea and vomiting during pregnancy will mostly go away by 12 to 14 week of pregnancy. Know about Hyperemesis Gravidarum and if you feel you have symptoms do consult a doctor for proper treatment.

I hope now you have an idea about what morning sickness is, how long it lasts, how you can get relief from it and other questions around the topic.

Do share your experiences about the symptoms you experienced during pregnancy sickness and tips on how you overcame the same.

Leena is a bohemian lady with creativity crawling in her skin. Her zest for love and life is infectious. An explorer looking to dive into an ocean of freelance opportunities. Call her a homemaker and a full-time Mommy to a 3 year old Miraculous Girl & a 27 year old Man :-D Her passion and tremendous vocabulary makes her fit for the role. She's the types: Who cares about what's around? Good with pyjamas and hubster's Shirts. Love to curl up on the sofa, put on the headset and let the world around fade...