You are at:Home»Baby»Baby Care»APGAR Score for Newborns – What, How and Why Explained

What is APGAR test or APGAR score for newborns?

What was your baby’s APGAR score in his/her APGAR test?

Why is APGAR test important?

Mommies, today I am here to discuss with you the very first test of your baby. Yes, you guessed it right. It’s none other than APGAR!!! 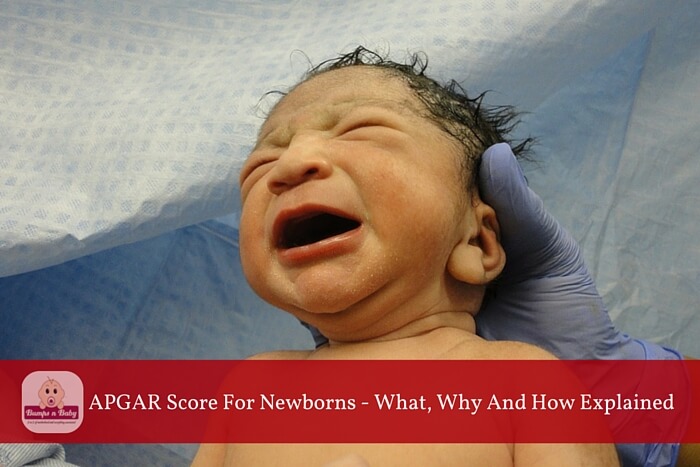 Most of you will be knowing about this test, but how many of you know about why this test was performed on your little munchkin soon after his/her birth or whether your babies’ urine or blood samples were collected or whether the test was painful for your baby or what were the check-ups done in this test?

If you want to know every bit of your baby’s first test, scroll down. Here we go….

What is APGAR score test?

APGAR scoring test was first developed by anesthesiologist Dr. Virginia Apgar in 1852 and the test is named after her.

It is the way of assessing and reporting the physiologic condition of a newly born baby soon after his/her birth.

You can also read the 31 things about labor pain no one tells you.

Why APGAR is performed?

APGAR practice is a routine quick health assessment for the newborns.

APGAR test is performed to determine if your newborn baby is physically fit to thrive in the world without any additional medical support. That is, it mainly checks whether a new born baby has normal breathing, heart rate, responsiveness, activity, and appearance.

Keep in mind that the APGAR test is not capable of predicting any long-term health issues of your baby, but it simply finds out whether the baby is ready to live outside the womb without medical support.

APGAR is a test performed without using any blood or urine samples and it’s done in few minutes’ time say at 1 and 5 minutes soon after birth.

APGAR – What are the health check-ups done?

What does APGAR stand for?

After the APGAR test invented by Dr. Virginia was standardised, the 5 vital signals that are to be tested were renamed to form the backronym APGAR.

So APGAR stands for Activity, Pulse, Grimance, Appearance and Respiration. 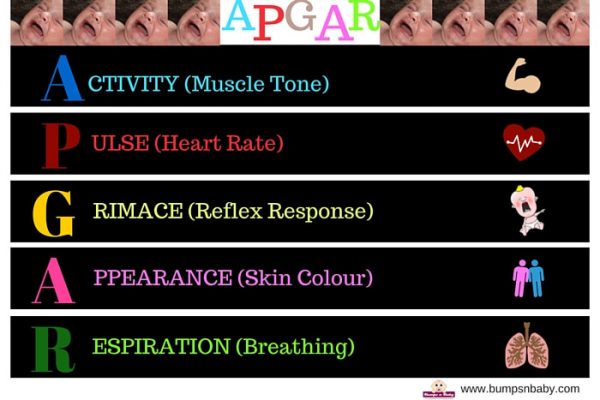 What is one-minute APGAR?

Assessment done at 1 minute after birth is called one-minute APGAR.

It gives the medical practitioners a picture of your baby’s physical health. It helps them to understand how the baby tolerated his/her birth process and if they need any extra medical care.

What is five-minute APGAR?

Assessment done at 5 minute after birth is called five-minute APGAR. The 5-minute score helps the doctors to get an idea of how the baby is performing once out from his/her mother’s womb.

It also measures how the baby reacted to any resuscitation attempts before this assessment.

What is APGAR Scoring?

I have mentioned above the five factors that will be evaluated during the APGAR test. Each of these factors is measured on a scale of 0 to 2 and the babies will score either 0, 1, or 2 in each category.

The final result is calculated by totalling all the points scored in each of the categories. The final score can be anywhere between 0 and 10.

Now let’s see how the APGAR scoring chart is for each category.

0 – If the baby is not crying and breathing

2 – If the baby cries strong and have regular breathing patterns

Do you know why babies cry soon after their birth?

While in the mother’s womb, babies get oxygen via umbilical cord. Once out of the womb, the amniotic fluid in the lungs should be forced out and lungs should be filled with air. But this could not be achieved by their normal breathing.

So babies cry to clear out the amniotic fluid from their lungs and to inhale the air from the new environment. During this whole process our tiny tots will get tired and very hungry making them to cry vigorously.

So it is very important to know what the APGAR score for breathing is. It tells how efficiently your baby was able to take his/her first breath and whether she/he needs a medical support for breathing.

Baby’s skin color is one of the factors considered in the test. Soon after birth most of the babies appear blue or partially blue.

Cyanosis is a scientific term for the blue color of the body. It is caused due to the lack of oxygen in blood.

Acrocyanosis is a condition where skin color appears normal and the extremities (arms and feet) appear blue.

A normal colour of the skin with pink hands and feet is regarded as healthy color.

0 – If your baby has no heart beat

Our babies heart beat begins at five weeks’ gestation. Once the baby is born the heart rate is checked using a stethoscope. A newborn heart rate of more than 100 beat per minute shows that the baby is healthy.

0 – If your baby’s muscles are loose (flaccid/limp)

In a healthy body, all the muscles are always ready for action at all times by constant partial contraction, which is referred to as muscle tone.

Even during the relaxed state of our muscles, nerve impulses from our brain stimulate specific muscle fibres to contract and keep it toned.

Suppose if the baby has suffered brain damage in a complicated labour or if the baby’s brain has not developed fully or due to some other medical conditions, their muscle fibres may not stimulate and this will result in a flaccid (limp) muscles.

During APGAR test, the scoring in muscle tone helps to find out any abnormalities related to movement and muscles.

0 – If your baby shows no reaction during stimulation

1 – If your baby grimace during stimulation

Reflex response is examined by response to stimulation/a mild pinch. If the baby is healthy, then he or she will respond to stimulation either with a cry or active movement. 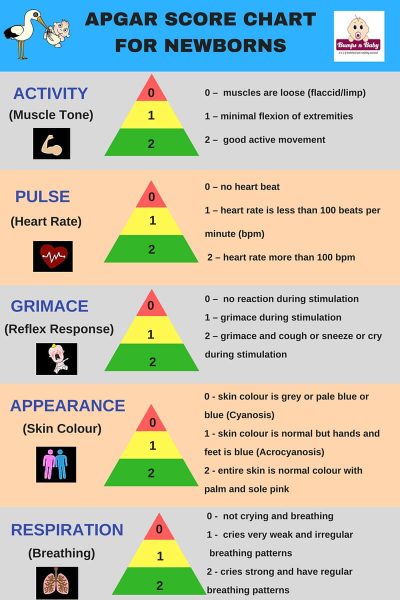 APGAR scoring results depends upon the total score obtained by adding scores in each of the category and can range between 0 and 10.

Does your baby score a perfect 10?

I don’t think so. No babies will score a perfect 10 as most babies lose their 1 point for their blue hands and feet which is normal soon after birth.

The scores above 7 are regarded as normal scores giving a signal that your baby is healthy.

What does the score in one-minute APGAR mean?

For the one-minute APGAR, if the score is between 7 and 10 , it signals that the baby is healthy and just require routine post-delivery attention.

Scores between 4 and 6 signals that the baby requires help for breathing. This may include a clearing of his nostrils by suctioning or helping him breath simply by massaging him, or it could even mean giving him oxygen depending on the situation.

What does the scores in five-minute APGAR mean?

If the score is below 7, the baby will be needing medical assistance and he will also be repeatedly tested every five minutes up to twenty minutes.

A low score at 20 minutes after the birth is considered to be problematic. The low scoring indicates that the baby need extra care to adjust outside your womb. In such cases your baby may be shifted to a special care nursery to give extra medical attention.

Remember that if a baby comes out with a low score in the test, it doesn’t mean that he/she having a poor health.

These are some of the reasons cited by medical professionals for obtaining low scores.

This doesn’t mean that all the premature babies or c-sec babies scores only low point.

Why I am strongly saying this because my son who was born prematurely (34 weeks) via emergency c-sec, but scored 8 and 9 at 1 and 5 min respectively.

Read: Turning Back To My Life as a Preemie Parent

What if my baby scores less in APGAR test?

Few babies experience some problems like low oxygen in their blood or breathing problem or low heart beat during birth.

As soon as doctors are done with APGAR it’s easy for them to take safety measures.

If breathing problem is noticed, a mask will be placed over their face to pump oxygen directly into the lungs. In most cases this will work out and within few minutes they start breathing on their own.

If they don’t breathe in this attempt, then the next step is to place a tube into their windpipe to administer medications and fluids to fasten their heartbeat.

If the second attempt also fails, then they will be transferred into special care neonatal nursery and a pediatrician will be called to take care of the baby in the best possible way.

Can the APGAR score give an indication about the future health problems?

APGAR score is a method to determine the newborn health condition soon after birth. It cannot be used as a tool to predict any long term or future health complications or conditions.

Even if a baby scores less or shows any problems in first five minutes of his or her life, he will usually overcome those difficults as he will soon adjust to outside the womb conditions. So a low APGAR score is never an indication of furute health issues.

Having said that, there are some evidences that show that low scores at the five-minute mark may give a clue to conditions such as cerebral palsy in some cases. If your doctor thinks that the low score is abnormal and doubts a future problem, there may be further tests conducted.

Limitations of the APGAR Score:

No method is perfect. This method also has certain limitations.

The scoring depends upon the physiologic maturity of the new-born baby and in no way related to birth weight of the baby.

So its unsuitable to consider APGAR score alone to diagnose certain medical conditions of the baby. But it does give a quick evaluation of your baby’s general condition.

I would like to finish by stating that the APGAR scoring method is not a complete tool to predict your child’s future health or their personality traits or their mental skills.

It just gives signal to the medical practitioners to analyse how your baby is adapting from foetal to neonatal stage. Thus helping the doctors to provide extra care for those babies who find it difficult to adapt outside their mom’s womb.

Hope now you have understood the definition of APGAR, why and how it is done.

What was your kid’s APGAR score?

A darling wife of Vijay Varadarajan and a lovely mom to Rithvik. A Biotechnology post graduate, Jayalekshmy quit her job the very next day she became pregnant. Realized her passion for cooking after Rithvik came into their life and now loves to experiment different cuisines. Her other interests are home interior decoration, gardening, internet surfing,a bit photography and whatsaap chatting with her loved ones.