You are at:Home»Mom»Parenting»8 Bollywood Dialogues That Highlights Motherhood

We Indians look for 3 things when it comes to onscreen dramas – Entertainment, Entertainment and Entertainment!!! Today I bring to you the 8 evergreen Bollywood dialogues on motherhood.

The quintessential mothers of Bollywood have always succeeded in entertaining us with their emotional punch dialogues and realistic acting.

Be it the always sacrificing loving and sobbing maa or the bold and daring revenge seeking powerful mom- mother characters are unavoidable when it comes to Bollywood films. 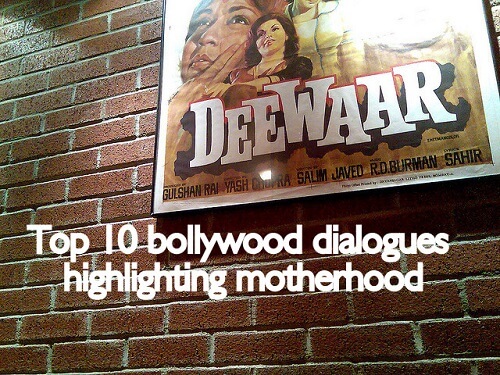 Here are top 10 dialogues on motherhood from the never-ending drama space of B-town.

Some dialogues are so famous and remembered through generations that sometimes we hear these filmy dialogues from our mommies too!!!

Meaning – I have mother with me!!!

This evergreen dialogue is an explosion of emotions dedicated to motherhood!

Nirupa Roy played the role of mother to her two sons played by Amitabh Bachchan and Shashi Kapoor.

This famous dialogue is from the movie ‘Karan Arjun’ in which Rakhee played the role of mother.

“When a mother’s heart beats out of pain, cracks can appear even in the sky.” And I should admit that its true.

This emotionally strong dialogue from the movie Devdas makes it clear to the audience that one will not stay happy after hurting a mother’s heart.

Kiron kherr played the role of the Sumitra, Paro’s mother in this film starring Sharukh Khan and Aiswarya Rai.

“Only a mother can understand what her beloved son wants”- Yes I should say that’s absolutely true.

Farida Jalal played the role of the doting mother to Anil Kapoor in the film Laadla.

This dialogue is from the movie Maa Stars Jaypradha and Jitendra. It means that a woman is incomplete until she becomes a mother.

Isn’t that one of the best dialogues that highlights motherhood?

Transation– One who has mother with him has everything; one who doesn’t have a mother has nothing.

This line should be kept in mind by all of us because we live in a world where children are dumping their mothers in old-age homes.

Jaya Bachchan played the role of mother in the film starring Aftab Shivdasani and Esha Deol.

Another famous dialogue from the movie “Deewar”, by Nirupa Roy known for portraying iconic mother characters in Hindi cinema.

This dialogue means that you have not become that rich to buy your own mother.

This single dialogue from the movie “Chori Chori Chupke Chupke” beautifully depicts the entire life of a woman.

Farida Jalal plays the role of mother in this movie. The film stars Salman Khan, Priety Zinta and Rani Mukherjee.

These the selected dialogues on motherhood that are still remembered. You can also read about the 5 amazing teacher characters from movies and 9 movies of Robin Williams I want my daughter to watch.

Which is your favorite Bollywood dialogue that highlights the importance of motherhood? Do share with me in comments.