You are at:Home»Kids»Development»9 Robin Williams Movies I Want My Daughter to Watch 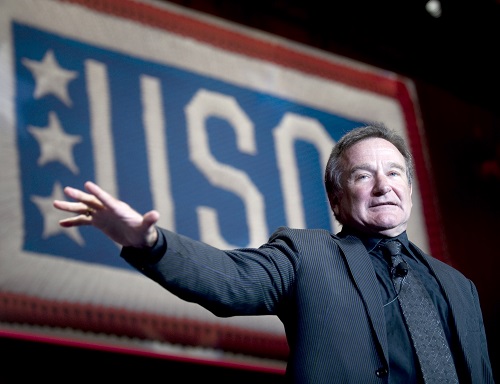 “Everyone has these two visions when they hold their child for the first time. The first is your child as an adult saying ‘ I want to thank the nobel committee for this award ’. The other is ‘ You want fries with that ? ’’ said this Brilliant actor. He further went up to say “I love kids but they are a tough audience”. Yes I am talking about the Academy Award Winner actor Robin Williams who bid good bye to this world recently. Here I am with the 9 Robin Williams movies I don’t want my daughter to miss when she grows up.

I remember very clearly Jumanji was the first super adventure movie that was discussed among my friends when we were in our school. Though I hadn’t seen that movie then,  the vivid scenes narrated by my friends had enchanted me. The whole concept of an ancient board game, a boy trapped in it for 26 years, jungle beasts, giant mosquitoes in the modern England background all were exciting for the little girl in me then.

You know what attracted me the most when I saw the movie afterwards? The square-faced , family friendly charming fella Robin Williams !! I was fond of his goofy screen friendly nature and stand up comedies. Little did I know about the struggle with depression and alcoholism this actor went through before ending his life in a piece of rope. Well RIP Robin Williams ..

Though this post is a bit late I wanted to make sure we pay tribute to this actor in the best way possible through this blog Bumps n Baby.

9 Robin Williams Movies I Do Not Want My Daughter To Miss:

The movie about Peter Pan and Never lands , this movie teaches us to encourage to rediscover our happy thoughts . Robin plays the role of peter pan rescuing his children from the Captain Hook played by Dustin Hoffman.

As I have already mentioned , Robin plays the role of a 12 year boy Alan who was trapped in the board book for about 26 years and the adventures that follows when he is released out of it.

This animated movie showed us a different world of Penguins of the ice laden poles. Robin played the role of love lace , one of the important characters of this movie.

The museum that comes alive by midnight this movie indeed is hilarious. Who can forget the Teddy Roosevelt played by Robin in this movie ?

Alladin is the well-known fantasy animated movie of Robin Williams where in he has lend his voice for Genie .

Suitable for kids above 8 years this classic movie features Kermit the frog played by Robin and his muppet friends.

I think Mrs. Doubtfire inspired us to create our own Chachi 420 or Avvai Shanmughi . In this movie, Robin plays a divorcee who disguises as a Scottish nanny Mrs. Iphegenia Doubtfire to be with his kids at home.

Heard of Popeye the sensitive sailor who regains his strength by gulping down a can of spinach ? One of the early characters in history which promotes the importance of green vegetables for children. Robin plays the role of that beloved sailor man in this movie.

Robin Willaims left us with gripping high impact roles and characters . He might have gone , but his legacy will live on through his movies. These are the 9  Robin Williams movies I would not want my daughter to miss when she turns 8. How about you ? Share with me your favorite ones.