You are at:Home»Pregnancy»Prenatal Care»Why Taking Test for Down Syndrome is a MUST During Pregnancy?

What is a prenatal Down Syndrome test? How and when is the test for down syndrome done?

How will I know if my baby has chances of getting Down Syndrome?

What are the different types of tests for down syndrome?

These are the questions that many pregnant women would like to know. The below article will brief you about down syndrome and the tests that are conducted to ascertain whether a woman is carrying a baby with Down syndrome or not. 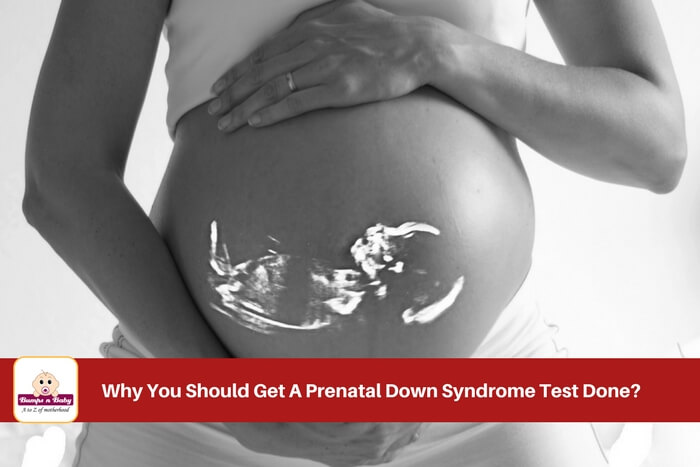 Down Syndrome is the most common genetic problem in children. Down syndrome occurs very early in a pregnancy when the foetus is forming. It is a lifelong condition and is caused by genes.

It is a condition where abnormal chromosomes or cell division during the development of the fetus changes the way the brain and body develop.

There are 46( 23 pairs) chromosomes in the nucleus of each cell of the human body, 23 of which are inherited from the mother and other 23 from the father. When an individual has a full or partial extra copy of chromosome 21, the condition is called down syndrome.

Down syndrome is named after Dr. John Langdon Down who first described this condition.

Is there a cure for down syndrome?

There is no cure for Down Syndrome. A proper understanding of this condition and early diagnosis can help in improving the quality of life of these children. With parents support and constant efforts, children with Down Syndrome can lead a normal life.

They may have or may be at an increased risk of health problems such as heart disease, thyroid, respiratory and hearing problems, Alzheimer’s disease and leukaemia.

What are the signs and symptoms of a child with Downs Syndrome?

Physical and mental traits of people with Down syndrome are a flat face, a short neck, small ears and mouth, slanting eyes, undersized head, excessive flexibility due to loose joints, low muscle tone and some degree of intellectual disability.

Although the physical characteristics are common, all children with Down syndrome don’t look the same.

In most cases, there is some delay in development and some level of learning difficulty. However, it can vary from mild to severe.

They may have difficulty managing everyday tasks and also some degree of communication problems. Again, some people with this condition may need a lot of support and some may lead ordinary lives.

However, early intervention will help improve skills and health problems associated with Down syndrome can be treated. There are resources that are available to help kids and their families who are living with this condition.

What is considered high risk for down syndrome?

How do you know if your baby has Down Syndrome?

Down syndrome can be diagnosed before the birth of the child or after birth.

After birth, if the facial and physical features of a newborn show typical signs of a child with Down Syndrome, then a genetic test will be conducted to find out if the baby is having down syndrome or not.

Before birth, when the child is in utero, certain screening tests are conducted to find out if the child is at risk or not.

During first and second trimesters of pregnancy, screening tests for Down Syndrome are carried out.

The screening test, however, is not reliable as it can wrongly identify babies as having a lower chance who then go on to be born with Down’s Syndrome.

Usually, when a screening test shows one in 150 or higher chance that your baby could have Down’s Syndrome, the doctor will offer the option of a diagnostic test to give an accurate result.

Diagnostic tests can be carried out only when the screening test results are positive or the results indicate that you have chances of carrying a baby with Down syndrome.

Diagnostic tests are performed inside the uterus and hence these test results accurately indicate that the baby has Down Syndrome. These tests have one percent risk of causing miscarriage but give 100 percent accurate results in diagnosing Down Syndrome.

What tests are included in screening test?

The below tests are normally used as a screening test for Down Syndrome.

A blood test (between 9 and 12 weeks of pregnancy) will let you know of any abnormal levels of two different pregnancy hormones.

Read: Doppler Test During Pregnancy – All You Need To Know

Second trimester Screening test is done between 14 and 20 weeks. It is also called triple test or maternal serum screening test. It measures the blood level of four pregnancy associated substances including alpha-fetoprotein(AFP), inhibin A, estriol, and human chorionic gonadotropin(hCG).

If you are carrying a baby with Down’s Syndrome, you will have higher levels of hCG and inhibin A in your blood and lower levels of AFP and estriol.

This test checks for fetal DNA circulating in the mother’s blood. This test is usually recommended for women who have a higher risk of having a baby with Down Syndrome or the results of any of the above tests show the risk of having down syndrome. After 10 weeks of pregnancy, this test can be carried out.If this test, indicates a high risk of Down Syndrome, then diagnostic tests are conducted.

What tests are included in the diagnostic test?

If you are tested positive for down syndrome in screening a diagnostic test is conducted.

Below are the tests that can identify Down Syndrome –

This test is done between 10 and 13 weeks of pregnancy. A tiny sample of tissue from the placenta is taken either through the cervix or through a needle inserted in the abdomen. This test can be performed during the first trimester, however; it has a greater risk of miscarriage than amniocentesis.

Amniocentesis is done between 16 and 20 weeks of pregnancy. A small amount of amniotic fluid is removed through a needle inserted in the abdomen. The fluid contains cells from the baby which is then tested for Down’s syndrome. This test, however, has a small risk of preterm labor and miscarriage.

A sample of the fetal blood from the vein in the umbilical cord is examined. This blood is then analysed to detect chromosomal defects or other abnormalities.

It is done when CVS and amniocentesis do not provide adequate results. This test is usually performed at 18 weeks gestation or later since the umbilical cord is very fragile in early pregnancy. There is a significantly greater risk of miscarriage than amniocentesis or CVS.

Types of Down Syndrome

It is the most common form of Down Syndrome. The child has three copies of chromosome 21 instead of two copies in all cells. This is caused by an error in cell division leading to an extra copy of chromosome 21 in the egg cell or sperm cell.

It is a condition where some cells in the body are normal while others have trisomy21. It is a rare form of Down syndrome.

It is a condition where a part of chromosome 21 breaks off during cell division and attaches or incorporates to another chromosome (usually chromosome 14) in the egg or sperm.

95% of the cases are caused by trisomy 21, mosaic Down syndrome accounts for 1% of all cases and translocation accounts for about 4% of cases.

Why should I get a prenatal Down Syndrome test done?

Nowadays many couples are not keen on taking parenting responsibility and hence postpone at a later age in life which increases the possibility of Down Syndrome in babies. Therefore genetic counselling becomes increasingly important in present times.

Genetic counselling provides information and support to people who are planning or expecting a baby and have chances of carrying a baby with Down Syndrome and other genetic abnormalities.

Screening for Down Syndrome is nowadays done as a routine part of prenatal care. But it is totally up to the expectant parents to take this decision of going for a prenatal test or not.

Many women do not want to go for the tests as they know that if the chance is higher in a screening test, a diagnostic test has a small risk of miscarriage.

The type of test you will have will also depend on your stage of pregnancy. It is always better to get these tests done earlier in pregnancy so that you get to know about the results and make decisions for the next step.

The next step can be termination of the pregnancy or accepting the fact and taking the decision to accept and love your child the way he is.

For both, you need time and support and an early detection of the condition helps in this.

Read: 9 Things All Parents Ought to Know about Autism in Kids

An early detection of the condition with the help of a prenatal Down Syndrome test helps the parents to be prepared to raise a differently abled child in a better way.

Hope you now have an idea about Down Syndrome, when can you detect down syndrome and the screening and diagnostic tests conducted to detect the same.

Did you do a prenatal screening test?

Do let me know in your comments if this article helped you or not.