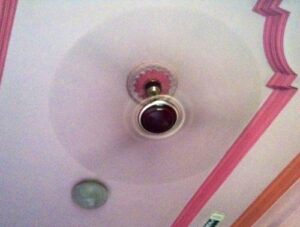 Newborn Babies and Ceiling fans? When Anshika was about a month old, she started her social smile. She used to smile at everything , fan , bulb , lights , and what not. It was kind of funny to see her smile at such things.

Gradually she started smiling at ceiling fan! Minutes , hours would pass by , but she would play and giggle looking at the ceiling fan.

When a ceiling fan rotates, there is movement and contrast happening against a ceiling whic is usually white or light coloured . But as they are too small, they are unable to see the ceiling fan as we adults can see. If the ceiling is white, more contrasting colours are formed against the dark fan. Young babies can quickly view it and this makes them smile, giggle and coo.

When the fan spins, the fast movements make a plethora of contrasting colours which babies love to see.

Anshika’s obsession with ceiling fans has disappeared now. But my colleague’s 5 year old son is passionate about fans even now :). I hope many moms would agree to the ceiling fan obsession of their kids :).

So , was / is your baby obsessed with ceiling fans ? Do let me know.