You are at:Home»Kids»Behaviour»Why Frozen Desserts are the BEST for Your Kids This Summer?

Are summers draining your little ones out?

Looking for yummy treats for your healthy munchkin to beat the summer heat?

Ever heard of frozen desserts?

Summer is coming at us with an unbridled rage. We have no choice but to look around for healthy yet delicious and chilled preparations to escape the brutal summer heat.

Scorching kitchens that remind you of furnaces, make you want to spend less time in the kitchen and buy a big box of ice cream and dive into it, head first! But then you worry about calories and ditch the thought and trudge into the kitchen unwillingly to make something else.

But what if I tell you that you can have your ice-cream and eat it too?

That is what we will tell you about today! 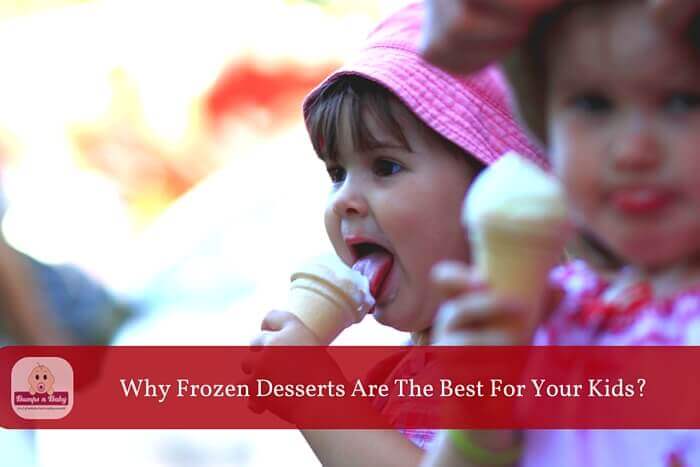 What are frozen desserts?

Ice-creams have become synonymous with summers. They have been around for as long as we can remember. But then, it is also a forbidden item in many households. Moms want their children to eat healthy and not freeload on calories. Plus the fat content, especially the saturated fat levels, don’t help either. That is where frozen desserts come in. They haven’t been around for long, but they are really catching up.

Think of frozen desserts like ice-creams where the dairy fat is replaced with vegetable oils. This means that the frozen desserts have lower saturated fats and are free of trans-fats. Apart from this, they are as delicious as your ice-cream. For all you know, you might have already had a frozen desserts and not realized it was any different. I know, that you may be shaking your head in disapproval.

How can it be that you have had frozen desserts and not known about it?

Well, it is because you may have thought that you were eating ice-cream! Now I know for sure that your eyes have widened in disbelief and would be thinking that I am pulling your leg.

What is the difference between ice creams and frozen desserts?

When it comes to looks, frozen desserts and ice-creams are the same. But when it comes to ingredients they differ. The contents of ice-cream are milk solids, milk fat, sugar, permitted food color and flavor.

Frozen desserts contain milk solids and proteins, sweetening agents, color and flavor- like ice-creams but no milk/ dairy fats. So by changing just one ingredient of ice-creams we get frozen desserts. That way the whole experience of having an ice-cream doesn’t change. The only thing that will change is the health aspect as frozen desserts are healthier.

So next time, if you are enjoying the frozen dessert – do not fret about not having the `real’ thing – you are in all probability enjoying a healthier* ice cream experience!

How is frozen desserts healthier than ice-creams?

A lot of people love ice-creams, but are scared to have ice-creams. Ice-creams don’t exactly have a reputation of being healthy you see! But then at times, especially in these summers, when your kids ask for ice creams, you can’t really say no. While coconut water, homemade fruit lollies and juices fare high on health charts, the frozen dessert is a far healthier option when compared to ice-cream.

There are 3 reasons why a frozen dessert is healthier than an ice-cream. They are-

*The values above are according to the declared values of 100gm of both products.

Will frozen desserts taste different when compared to ice-creams?

No, it tastes just like your normal ice-creams. Till the time you actually check the pack you wouldn’t even know that you are eating a frozen dessert. In many countries both desserts have similar names, but in India, ice creams that do not use fat from dairy sources are required to be called ‘frozen desserts’ by law.

Both of these varieties are loved by many who look for a sweet treat after a special meal.  They both are not only delicious on the palate but can also satisfy the mind.

There you go, the low down on frozen desserts. So the next time your child wants to have some ice-cream, you can always give him/her a yummy frozen dessert, like the Kwality Walls range offers. It is tasty, creamy and most importantly healthy.