My lil one’s Annaprashan was held at Kochu Guruvayur Temple, Matunga on 13th of January 2013 when she entered her sixth month. 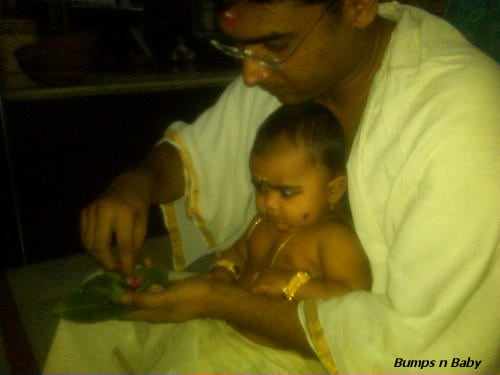 Annaprasham is also known as choroon,annaprashana vidhi, annaprasan or Anna-prasanam, among Hindus ; a rite of passage ritual where in a new born is offered Annam (rice) ,for the first time in his/her life other than breastmilk. 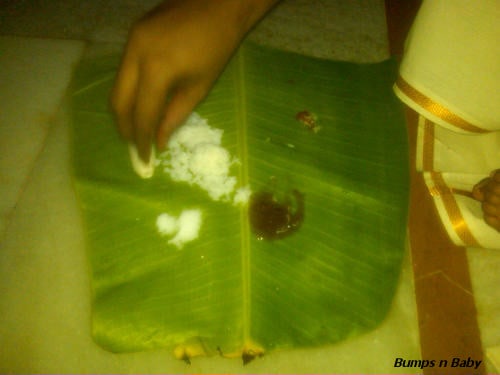 As per the Kerala tradition/ ritual, the infant is dressed in a ‘ kasavu mundu ‘ (cream coloured dhoti with golden jari/border) , made to sit in the lap of his/her father/ maternal uncle and offered various offerings like chandanam( Sandal paste), tulsi leaves,flowers etc by the priest of the temple. Her/ his name is whispered to the baby thrice ,offered a bit of rice preferably brown rice , salt, a sweet porridge made of jaggery, ghee and rice known as payasam, and banana thrice so that the baby could taste it. Then the mother is asked to give the same to the baby followed by relatives/cousins. 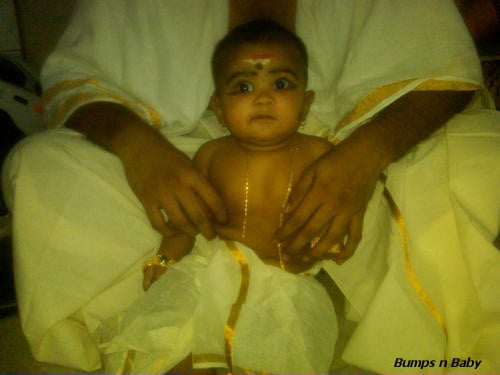 My baby just loved this whole thing as she was exclusively breastfed till 6 months,even water was not given to her ! So this whole concotion of sweet and salt felt sooo good for her. She smacked her lips over and over again and started opening her mouth for more which was sooooo cute to watch 🙂

In certain parts of Kerala like Calicut, there is a ritual in which the child is offered an array of different things and made to choose anything that he/she likes to hold/play with. These will include a bangle or jewel (symbolising wealth), a book (symbolising learning), a pen (symbolising career) and a clay pot or container of earth/soil (symbolising property). The child’s future direction and prospects in life are indicated by the object which it prefers to touch/hold.

How about the ceremony of your child ? Share with us 🙂