You are at:Home»Kids»Behaviour»Apply These 5 Secret Techniques to Handle Toddler Tantrums 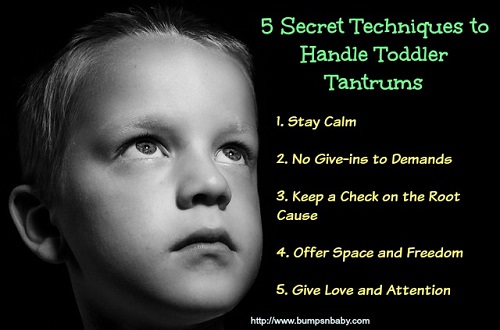 For the reason that toddlers cannot express their needs so explicitly, tantrums come to their rescue. In this post I am listing down the 5 effective techniques to handle toddler tantrums.

Tantrums in simple terms can be explained as an uncontrollable outburst of anger and frustration.

Children between 1 to 3 years of age have higher intensity of tantrums. It is because the communication between the parents and the children though takes place, but not everything is understood by both the parties.

There are times when this sudden outburst becomes difficult to handle. Such situations plainly flare-up causing irrational behavior amongst the kids as they grow.

In this course, there are kids who harm themselves or others, which needs to be paid attention and taken care of, as it can lead to serious issues later in future.

The exploding of frustrations and the inability to express their difficulties makes the kids resort to tantrums. If you are in a situation wherein your kid is crying on the top of his voice, yelling and whining for some silly unknown reason, stay calm.

Scolding or shouting at your toddler will not do any good to the state of affairs; on the contrary it may double the trouble.

Just be with your little one until he has expelled all his emotions. As soon as it is over, you may simply take him in your arms. The magical hug does all the wonders!!

2. Never Give-in to the Demands:

If you keep giving in to the demands during tantrums, then the kid is likely to be more tantrum-prone and the frequency of the tempers will have no ending. But yes, if it is on something you have promised and not fulfilled then either make no commitments or else keep your word.

It is very hard for the kids to accept disappointment from the ones on whom they have put in all their undoubted trust and faith on. This aspect triggers the tantrum buds. So avoid commitments as much as possible.

To illustrate this here is an example which recently I encountered.

One of our very close family friends’ 3 year old daughter desperately wanted dandiya sticks. Her father had promised her that he will get them while returning from office and he deliberately forgot thinking she might have forgotten too.

As soon as he reached home and when his daughter saw him devoid of the sticks, there was a havoc created. Finally, the demands had to be met in after the entire hullabaloo.

3. Keep a Check on the Root Cause of Tantrums:

If the parents are aware about what activates the tantrums in their toddlers, they can take caution steps at the very root of it and distract them off to getting any further. This puts an end to a possible heated situation in future. This needs to be done very diplomatically and is the safest way to dealing with kids.

Like for example: A frequent change in their time-table may lead to tantrums. Jianna always takes bath after she is back from her creche so even on holidays I make it a point not to change her routine.

Toddlers are at a stage where they explore and discover a lot about their strengths and the world around. They want to have their own little adventures. Putting too much of restrictions, bans on everything they do and say /using a lot of NOs also leads to emotional turmoil.

Of course, with supervisions from our end on their adventures, we can definitely offer space and freedom for their fun world.

Honestly speaking, I had the habit of saying a lot of NO and enjoyed being a disciplinarian Mommy to a baby who was just around 10 months old (so foolish of me).  It was on my elders’ advice I stopped using negations and started affirmative sentences. Voila! It resulted into a better parenting making a lot of difference 🙂

5. Give Love and Attention:

Toddlers crave a lot of love and attention. Mother Teresa once said, “In today’s modern world, parents have no time for children, neither have they time for each other”.

Let there be more of family time where each and every member is involved, where there is a lot of communication, a lot of give and take in terms of love and attention.

The atmosphere at our home shapes our children into a healthier being. There must be at least one time where the whole family eats together. Let us forget the mess made, focus on the happy times we give our children.

Generally, tantrums reduce with age. But if you still find an increase in the intensity of tantrums, then you should seek an expert’s advice, preferably a doctor or counselor. I am sure we have all read “A stitch in time, saves nine”.

Hope you liked my article on handling tantrums in toddlers. Do let me which is your secret technique to handle tantrums of your toddler 🙂