You are at:Home»Kids»Behaviour»11 Ways To Tackle Your Toddler Without Driving Yourself Crazy

Today I bring to you the 11 effective ways to tackle your toddler – to make him or her do what you want as we know toddler tantrums are inevitable.

The tiny little newborn that snuggled well in my arms is now in his ‘terrible twos’ with the blink of an eye!

As he stepped into his second year, he has learnt so much about the world already. Not only has he learnt to walk, run and talk, but he has now got ideas of his own!

He chooses what dress he wants to wear and what channel to run on the TV. He will even command where I should sit and which pillow I should sleep on.

He has his own opinion for everything and anything under the sun. And to add he has those tantrums that he throws at totally inappropriate time and place. As a stay at home mom who takes care of him 24×7, this definitely drives me crazy. I guess the scene at your home wouldn’t be different either.

Giving commands and trying to discipline a toddler does not work all the time. At times you will have to enter their world and be a kid yourself to tackle them. You can also refer to the ways to handle toddler tantrums.

11 Easy ways to tackle your toddler: 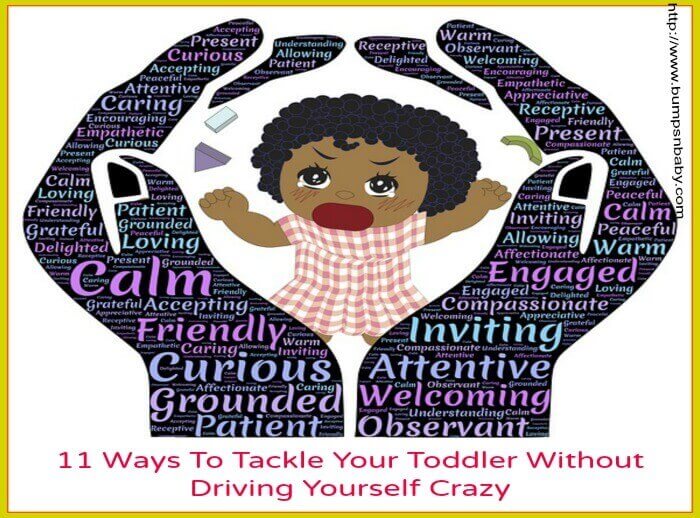 Being a creative person, I have found several ways to manipulate my mischievous munchkin and trick him to do things in my way. Yes I am the boss, if not always 😛

So you, the poor caretakers of mighty little toddlers, read on. Learn the tricks to make your toddler do what you want!

Distraction is a tried and tested technique that works on all toddlers. When my son is throwing a tantrum or won’t stop doing things I don’t want him to do, I turn his attention to something else.

“Hey, look there is a dove in the terrace”. Or “Oh, amma’s phone is missing. Can you search?” I build the conversation in that direction and my son soon forgets what he was up to!

It’s easier to distract toddlers and so distract them when they are up to something naughty.

Toddlers closely observe what we do and love to pretend like grownups.

Yes they do imagine a lot and are capable of living in an imaginary world of their own. How cool is that?

Instead of reasoning with them by breaking their imagination, get into their own world to achieve what you want.

My son often gets hold of my phone and pretends as if he is talking on the phone, just as I do.

I want him to use his toy phone instead.  But he wants my phone because he is playing ‘do what mom does’ game in his imaginary world. What to do now?

I take the toy phone and talk through it for a minute. Then I tell him, “Look, there is a call for you on this phone. Talk to grandma”.  Haa…. this works and he takes the toy phone from me. Now I tactfully pull my phone from him and keep it in a safe place.

Pretend and play with them to get things done the way you want it.

#3. Call those scary characters for your help:

This is not a good tactic, but still can be used in moderate ways if you are out of tricks.

Yes scaring your toddler can do some tricks. Create imaginary characters that are reasonable and somewhat logical.

Scare them but don’t overdo it.  Don’t scare them to that extend that they develop phobias.

For example, we have this made-up character called ‘meemee-maama’, and she visits every house at lunchtime, dinnertime, sleep time etc.

We have convinced him that if he doesn’t sleep, meemee-maama will come and sleep with him. So if he is not ready for his bed, I ask him, “Will you sleep with meemee-maama today?”

#4. Give him choices, but make them limited:

Offering kids with choices and letting them to choose what they want gives them a fake idea that we are giving them power to decide own their own.

Instead of forcing them to do things, give them choices on what you want them to do and let them choose. This will really work most of the time.

When my son refuses to drink water, I ask, “Hey you want the sippy cup or the new tumbler?”

He feels he has some control over things and will choose what he wants. He would happily drink water from the sippy cup he has chosen.

Even before I know my son is going to do something naughty, I predict his behavior and offer him an alternative.

When my son is taking our kitchen cups to the balcony, I know his next move will be to throw them out of the balcony. I don’t tell him “Don’t throw them”. That might give him the idea even if he hasn’t thought of it.

Instead I ask him enthusiastically “Hey, you want to make building with those cups?” And he will be happy to play that game, because all he wants is to be engaged in an interesting activity.

#6. Give him a sense of competition:

Toddlers love competitions. They always want to do things first.

When my son refuses to sit in his highchair, I tell him “Amma is going to sit in the high chair and eat”.  That’s it. He will come running to the highchair in no time.

This is not my favorite tactic, because I feel I am making him narrow minded in a way. But then, it works and he actually loves this little game.

#7. Make them help you – they will feel valued:

Kids take helping very seriously. It gives them a sense of accomplishment.

To make them do things the ways you want pretend as if you are seeking help from them.

Make them do small tasks and appreciate them for what they do.

If my little one is pestering me a lot when cooking, I will say “Can you pick up that lid and give to amma?” “Thanks. Now, can you pick these coriander leaves for me?”

He will do whatever help I am asking him to do without disturbing me. He is engaged in some activity and I can get my work too.

It’s also a double benefit, because sometimes he really does help me get things done 😛

I am good at creating new imaginary stories relevant to the current situation.

My son wants to play with the plug point, even though he knows it will give him a shock. Instead of lecturing him for the 100th time why he shouldn’t do it, I tell him “Hey, amma met an aunty at the grocery shop. Her baby touched the plug point without listening to her. She got a big shock and fell on the ground and hit her head. Poor thing.”

This made up story with a little enacting is enough to distract my little munchkin from the plug point.

#9. Give a lengthy explanation:

This was one of our funny tactics that worked before Krishna started understanding our language.

Now that my son is good at catching every word out of our mouth, I don’t use this trick anymore.

Sometimes your toddler will have a different idea of how to do things. If it doesn’t really matter, let her have her way.

If she wants to play with her sippy cup and spill a little water in the living room, let her do that. You can clean it up later, right?

There are those times when my toddler seems to be cranky and fusses over one thing after the other with no particular reason.

It’s usually when I am too busy to give him full attention or he is just too bored. A cuddling and nursing session or a change of scene by doing a quick walk around our apartment does magic!

Understand that this is just a phase of toddlers.

Throwing tantrums, not obeying parents and doing things the way they like are all part of the development. After all they are just toddlers. Don’t treat them as adults!

Always try to see the world through the eyes of a toddler when dealing with them.

Hope you liked this article on ways to tackle your toddler.

How about your toddler? Is he or she expert in throwing tantrums? How do you deal with it? Is there any method that works for you all the time? If yes please share with me in comments.

Vandana quit her software career because she found her mother brain lost capability to process anything beyond her child's needs. She lives in Chennai with her husband and two year old Vihaan Krishna. Becoming a parent has helped her understand life in a much better way. She wants to share her new found wisdom to the benefit of other judicious parents who are constantly wanting to give the best to their kids.