You are at:Home»Baby»Baby Care»Polio Drops for Baby – When, Why and How Answered

Is it mandatory to give pulse polio drops for baby by the government each time it is announced?

In this post I write about the polio drops for baby, how its classified and the FAQs on the same.

When you become a parent, one important thing that you need to keep track of is the vaccination schedule of your baby.

One of the first vaccinations given as soon as your baby is born is the Oral polio vaccine(OPV). After this, several doses are given as per the vaccination schedule. Another related vaccination that the doctors are recommending these days is the Inactivated polio vaccine (IPV). Apart from this, the government provides pulse polio drops from time to time and urges that all kids below 5 years should be given the drops. 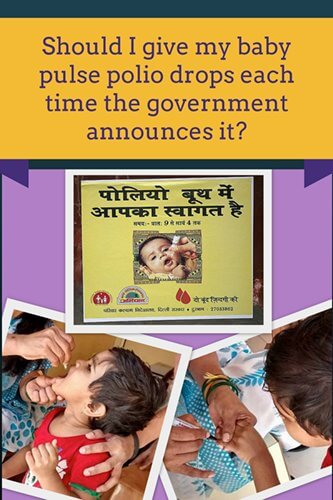 Today, we will learn the differences between the three and why it is important to give the pulse polio drops to your kid whenever the government announces it.

Polio or poliomyelitis, is a highly contagious viral infection caused by the wild polio virus. Polio enters the body through the mouth, in water or food that has been contaminated with feces from an infected person.

In most cases, the infection caused is mild and the person will recover fully after a few days. But in 5% of the cases, the virus moves from the intestinal tract to the bloodstream and will attack the nerves. This can lead to paralysis, breathing problems or even death.

There is no cure for this kind of polio. Hence, our only defense is to vaccinate ourselves against it. Like other illnesses, kids (especially under 5 years) are at the highest risk of being attacked due to their underdeveloped immune system.

Most developed countries in the world including US and UK are already polio free. India is all set to join this group as there have been no new cases of polio in India for the past three years, thanks to the vaccination efforts. However, we are still at risk of contracting this virus from neighboring countries where the virus is prevalent.

As mentioned before, lets see in detail the 3 types of polio vaccines available, their benefits and whether all the the three should be given to babies and kids.

Oral Polio Vaccine or OPV has been used in India for many decades. It’s very simple to give this vaccine since all that is needed is for the doctor or health worker to put some drops in the baby’s mouth. This is also quite inexpensive, and hence all of us can afford it.

IPV is a type of injectable vaccine currently used in countries like USA. These days, doctors in India are also recommending this vaccine.

IPV differentiates itself from OPV as it contains inactivated version of the virus instead of the live, weakened virus. In case of OPV, there is an extremely small risk that someone can develop polio because of the vaccine itself (one in every 2.7 million). This is a very rare case, and certainly the risk is much, much smaller than not being vaccinated at all. Still, the risk can be completely overcome if you also give IPV to your kids.

However, IPV is more expensive and not everyone can afford it. In case you can afford it, and you want to eliminate that small risk, IPV is highly recommended to be given before OPV.

From time to time, the government announces “National immunization day” and encourages all kids under 5 years to receive OPV under this programme. This immunization is done in addition to the regular immunization through the above two techniques, and not instead of it.

Apart from government hospitals, in some places, volunteers even go from house to house to vaccinate the kids.

A question rises in the mind of many parents – “I have already given all the doses under my child’s routine immunization program. Is this still needed and is it safe?”

I am attempting to answer some of these questions below.

1. Is it safe to give these pulse polio drops even if I have given them already? Can my child be overdosed?

There is no such thing as an overdose for this vaccine. You can safely give them again the polio drops on the pulse polio day.

If your scheduled immunization date for OPV falls very close to the Pulse Polio programme date, check with your doctor if your baby needs to be given the polio drops again.

For example, my friend’s 9 month old kid had her measles+OPV scheduled four days after the pulse polio date. Her doctor asked her to get the OPV through the pulse polio program and come to him on the same day to get the measles vaccine (instead of waiting for four more days).

2. Is pulse polio drops by the government necessary for my baby or kid?

The strong answer is YES. There are two important reasons for this.

By giving the vaccine to the entire country on the same day, this is a really effective way to make sure that the wild polio virus is completely eradicated. This ensures that we can be a polio free nation.

3. Can I give OPV when my child is sick?

Generally, OPV can be given even if your child has fever or diarrhea. It is better to confirm with the doctor when unsure.

4. Are the government centers safe and hygienic for giving OPV to my baby? Are there any alternatives?

Even the most affordable parents go to government centers to give OPV on the national immunization day. It is generally found to be hygienic and safe.

If at all you have a doubt, you can always get the OPV given at your private hospital, on the same date.

Hope you are now better informed about polio and the vaccination options available. So, next time don’t forget to walk-in and get your child vaccinated on the national immunization day.

You can also read about dental hygiene in babies, ear care and winter care essentials for baby.

Hope you liked my article covering the frequently asked questions on pulse polio drops for baby.

Vandana quit her software career because she found her mother brain lost capability to process anything beyond her child's needs. She lives in Chennai with her husband and two year old Vihaan Krishna. Becoming a parent has helped her understand life in a much better way. She wants to share her new found wisdom to the benefit of other judicious parents who are constantly wanting to give the best to their kids.