You are at:Home»Kids»Development»5 Principles of Mahatma Gandhi I Want My Child to Imbibe 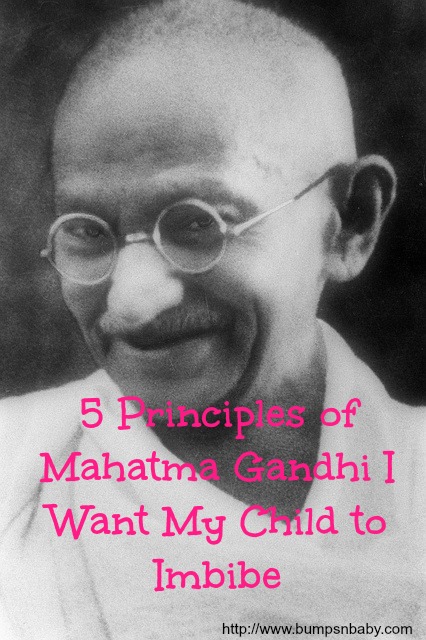 Every night when Anshika sleeps, I and my husband discuss about her. I tell him how much I wish to inculcate confidence in our daughter that would help in every phase of her life. My hubby talks about the day when he took her in his arms as a newborn and how tensed he was as a first time dad. He wishes to have her highly educated, independent financially and emotionaly as well. Gandhi Jayanthi is coming up and I discussed with my hubby about the principles of Gandhiji and how we  should inculcate those in our child. Hence compiling a post here on 5 Principles of Mahtama Gandhi I want my child to imbibe.

We all have read and studied about Mahatma Gandhi in our school and college days. Why not we introduce his principles right from home?

5 Principles of Mahatma Gandhi I Want My Child to Adopt:

Its hard to believe that someone can get freedom without shedding blood, but Mahatma Gandhi made it possible. Non-violence was a part of his value system. He believed that every problem no matter how critical, can be solved through non-violence.

I wish my daughter understands the true essence of  Bappuji’s quote ” An eye for an eye only ends up making the whole world blind”.

Mahatma said ‘There is no place for lies in my dictionary”.

Once Mahatma stole his brother’s bracelet to incur the debt he made.  His heart was filled with remorse and he promised never to steal again. He wrote down his crime in a piece of paper and handed over to his father.

His father sighed and tore up the paper. The young Mahatma understood the power of truth then.

I wish my daughter speaks up the truth always.

“A ‘NO’ uttered from the deepest conviction is better than a ‘YES’ merely uttered to please, or worse, to avoid trouble” .

Human can make mistakes but its important to make him realize his fault rather than punishing him.

If someone says something bad about you don’t reply  in bad words, instead pray to God that he realizes his mistake.

My lovely angel, listen to what  Mahatma says “The weak can never forgive. Forgiveness is the attribute of the strong.”

Gandhiji used to wear a dhoti and for this many Englishmen had made fun of him. Critics even called him a begger or Fakir.  But Gandhiji always believed “A man is not identified by his appearance but by his thoughts”.

Even when Gandhiji got invited to attend dinner at Buckingham palace he went there in his khadi dhoti and shawl.

“Live simply so that others may simply live”.

The British made fun of him, fought against him, tortured him physically, but Gandhiji kept moving  on. The same thing we should follow in our life, keep moving on no matter what difficulties you come across, one day you will definitely be victorious.

These  are the 5 priciples of Mahatma Gandhi I want my child to imbibe. We as parents can adopt it ourselves and be a role model for our children too.

Let me know what is your learning from this great soul.