You are at:Home»Kids»Activities»8 Popular Bears who Influenced Children all around the World

Have you ever heard of the Teddy Bear day? It falls on 9th September every year. But you surely have heard of Teddy Bear, right. I mean who hasn’t?

The Teddy Bear day…. sounds really cute, doesn’t it? Thanks to my teacher’s role, I am quite acquainted with such charming days and the lovely celebrations at school. 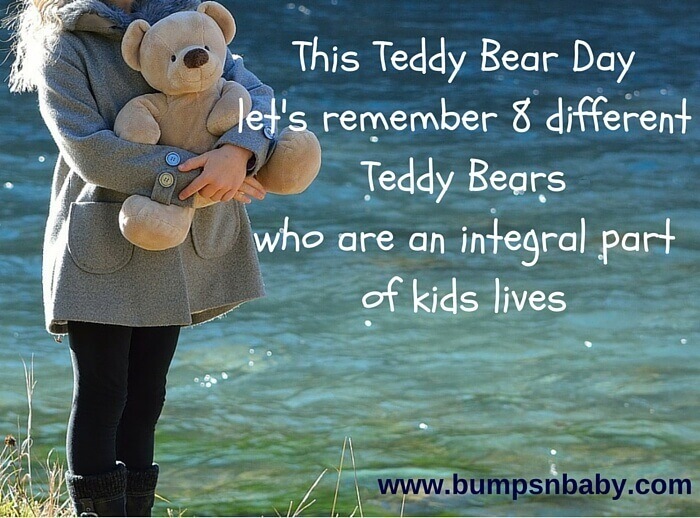 Nobody’s childhood is complete without owning a teddy bear. These loveable, adorable and endearing stuffed toys definitely hold a very special place in our lives. So what if we are adults… I am sure somewhere in the corner of our unforgettable childhood memoirs there is one such old teddy bear, who you have hugged tight when you’ve slept alone, shared all your kiddo worries to, who has seen almost all your birthday parties and who has adorned the center of your throne (a.k.a. your bed) always.

Do we know the history behind Teddy Bear Day?

What is teddy bear day? For that you need to know the history of teddy bears.

It all began in 1902, with a hunting spree by the then American president Theodore Roosevelt in Mississippi.

Even after three days of hunting, he had found nothing. Finally his guides and dogs tracked and attacked an old black bear.

When Roosevelt saw the bear’s agony he refused to shoot the animal and immediately asked for its release. His act of kindness and mercy spread like a wild fire and became the talk of the country.

In his honour, the bears came to be known as Teddy Bears and became a blockbuster hit internationally. It has been more than a century now and still we remember him for saving an old bear’s life.

“Little deeds of kindness, little words of love,
Help to make earth happy like the heaven above”.

If you ask about my favorite teddy bear, it is Winnie the Pooh. I have a big faced and small-bodied Pooh whom I love a lot even after all these years.

I was so possessive about it that whenever my little cousins and young friends visited me, I hid it in my closet. Please don’t label me selfish or mean because this was done because I loathed it when they pulled my Pooh’s ears, dragged him on the floor as it was too big for them to carry, touched him with their dirty – sticky hands staining him all over and loosening his buttoned eyes and nose.

But now when my 2 year old Jianna does the same, I don’t seem to have many issues, maybe that is the magic of motherhood. We let the kids be kids…don’t we? 😛

8 Popular Bears who are an integral part of children’s lives all around the world:

In today’s post I have listed the 8 most popular bears of all times, beginning with my personal favorite 😉

The stories of Winnie the Pooh are based in the Ashdown forests of Sussex. Pooh, though considered to be slow and innocent, is a talented poet and the stories generally have his little poems.

He is a hunny lover (honey) and is quite often pictured with a pot of honey. He is kind-hearted, humble, and social. Pooh always has his loving group of friends around him.

He is a fun-loving character and a mentor to Mowgli teaching him the laws of the jungle. He is also his loyal and vigilant friend.

Baloo became so popular that he was seen yet again in TaleSpin with the same name but as an excellent pilot wearing a flight cap and a yellow shirt. No wonder we all love him…right friends???

This was introduced to me quite recently by none other than my little one, Jianna – the YouTube expert.

We have watched almost all the episodes of Masha and the Bear on YouTube. It is based on a Russian folk tale which depicts the naughty adventures of a funny little 3 year old playful girl and a grandfatherly retired circus performer, the Bear who is her protective best friend and usually the victim of all her pranks.

The toys initially thought the large, cute, strawberry-scented teddy bear to be friendly and good-natured. Soon, Lotso’s true colors of being mean, selfish, cunning and ungrateful are revealed. But as usual, even this villain has a painful past. Betrayed and disowned by his owner Daisy, Lotso felt extremely dejected and hurt which turned him to be a stonehearted soul. Anyway, we still love this pink coloured, chweet, huggy bear.

Agreed this isn’t a teddy bear but a panda, but let us leave the fact aside. Jianna calls him a teddy bear and I am sure many kids refer to him that way too. So I am forced to include Master Po Ping here.

Po has a soft, mild and friendly personality. He is obese and is often mocked for that. But after he is crowned as the Dragon Warrior, there has been no looking back and the rest we all know how brave and strong he came out to be.

The story of the 6 legendary bears of the Gummi family who were forced to leave their land and sail to a new place was quite a rage in our days.

The quest to re-discover their land continues with adventures in their journey. The 6 humanoid Gummi bears are a pleasant group with distinct qualities; their persona full of life and every episode is a fresh, wonderful story.

Little John is Robin Hood’s loyal friend who always stands by him. He is jovial, playful, and carefree but at the same time he is thoughtful and makes his best friend aware of the potential possibilities and dangers of his daredevil plans. He is brave and great with weapons like dagger, bow and arrow.

This funny, talkative, foodie forest bear is always to some prank. This animated series was a huge runaway hit and it was always said that where there is a picnic basket, Yogi Bear will definitely be somewhere around.

So, next time you go out for picnics with goodies in your basket, watch out for this smart, cool Yogi Bear.

Do tell us about yours and your little one’s favorite and most loved teddy bears.

Wishing you all a very happy teddy bear day!