You are at:Home»Kids»Activities»DIY Mahatma Gandhi Spectacles To Dress Up Your Kid As Gandhi

Are you planning to dress up your kid as Gandhiji on Gandhi Jayanthi? Why not do DIY Mahatma Gandhi spectacles to complete the Mahatma Gandhi fancy dress costume?

I was overjoyed when my daughter started speaking a few words which included “Bapu” (as Gandhiji was fondly known as). She learnt this word from her set of dummy currency notes that I gave her to play. It fills me with joy that she can identify his photo on her currency notes, although she least knows about him. I hope she knows more about him and acquires his qualities when she grows up.

To help her know more about Gandhi I wanted to talk to her about this great grandfather of ours. The iconic round spectacles are so a part of the Mahatma that I decided to do a DIY Mahatma Gandhi spectacles along with my daughter and use the opportunity to teach her about Gandhiji and his principles. 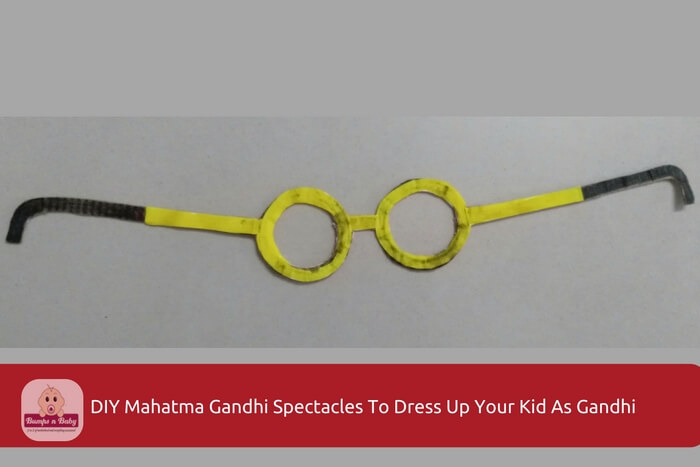 Here are a few things that I talked to my kid about Gandhiji.

Principles of Gandhi that you can teach your kids while doing this DIY:

His birthday, 2nd October, is commemorated as Gandhi Jayanti.

Truth and nonviolence were the only two weapons Gandhi Ji used to carry with him. These virtues of him encouraged people across the world to join the movements for civil rights and freedom.

While doing the DIY Mahatma Gandhi Spectacles, I utilized the opportunity to talk more about Mahatma to my child. Here are the attributes and strategies of Mahatma Gandhi that I really admire and want my child to imbibe when she grows up. You can also explain the famous Gandhi quotes too which I have included here. 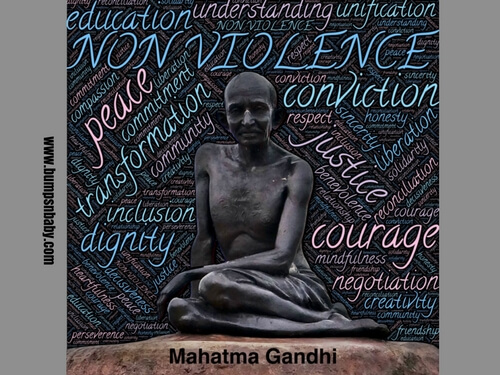 “My religion is based on truth and non-violence. Truth is my God. Non-violence is the means of realizing Him”

Gandhiji is known for his principle of non-violence. Mahatma Gandhi strongly believed that any battle can be won by nonviolence.

In memory of Mahatma Gandhi, 2nd October is also marked as International day of Nonviolence.

You can teach your child about non-violence by simply practicing it yourself. Let her see how you react to situations in a non-violent way. Talk to her about why ahimsa is the best way as it doesn’t hurt anyone and yet is strong. Talk to her about how people get hurt when we sort violent ways to sort things out.

“Men often become what they believe themselves to be. If I believe I cannot do something, it makes me incapable of doing it. But when I believe I can, then I acquire the ability to do it even if I didn’t have it in the beginning.”

Mahatma Gandhi neither had a great physique nor he had great political connections then. He lived a simple life. It was his belief in himself which kept him get going. He had a faith in himself. His strong belief in himself stimulated faith of millions in him. The one who believes in self can achieve any aimed goals.

“Truth stands, even if there be no public support. It is self-sustained.”

Gandhiji had a strong value system and inbuilt convictions in him. The truth was his most powerful weapon which he prompted throughout the life.

Encourage your child to always speak out the truth. Talk to him or her about the consequences of lying and going the corrupt way in life .

“I have not the shadow of a doubt that any man or woman can achieve what I have, if he or she would make the same effort, and cultivate the same hope and faith.”

Gandhi believed that he had no more than ordinary capabilities. It was his efforts, hope and power of spirituality in his actions that he valued. Mahatma Gandhi was rich in his inner resources. Before undertaking any important projects, he used to spend days in prayer and fasting to ensure that he has achieved purity of his intentions in a selfless manner.

Gandhi faced many common problems that we face in our day to day life; still, he kept going without losing faith in the divine. He never attached himself to rewards or results, but his deep relation with the divine flew into actions. Although he is physically no more, his spiritual thoughts and presence continue to inspire thousands of people every day. He is the proof that spiritual laws do work

“I do not want to foresee the future. I am concerned with taking care of the present. God has given me no control over the moment following.”

How many of us do really live each moment of life at fullest?

Gandhiji believed in living life at fullest. He always gave the priority to the task in hands without wasting time looking back at the past or worrying about future.

This in one quality that we must teach our kids. Talk to them about how the past cannot be changed and worrying only makes this worse. Teach them how to enjoy the present and the little things in life.

#6. Let your creative and innovative side awaken

Many incidents from Gandhi’s day-to-day life revealed that he was really creative and innovative.

I would like to narrate one such incident here.

One day while travelling in a train, one of his shoes slipped off and dropped on to the train tracks. Unable to retrieve it, he took off his other shoe and threw it to land close to the first. When a surprised passenger asked why he had done that, Gandhi smiled and said, ‘The poor man who finds the shoe lying on the track will now have a pair he can use.’

This incident shows that how creatively he used to think.

So lead to inspire creativity as Gandhi did.

“Be the change you want to see in the world.”

“The best way to find yourself is to lose yourself in service of others.”

Mahatma Gandhi used to work fifteen hours a day for humanity, for independent India. He had neither selfish motives nor any conflicts in his mind to drain his energy. He believed in service to humanity. Humanity is perceived as charity. To serve others means to give life and hope to disheartened and downtrodden. Service to mankind without expecting any returns become service to God.

Show your child how to care for others and help them see the world through the eyes of the poor and needy. Awaken empathy in them and lead them to choose the path of humanity.

Aren’t these motivating? No wonders why he is considered as one the most powerful leader.

These wonderful qualities of Gandhi- a divine soul inspires me to great extent. I really wish we could have more Gandhis in today’s era. Unfortunately, God cannot afford more Gandhis to sacrifice his life selflessly in this selfish world.

But, we can still see Gandhi in our kid by dressing him as the one. To help you in this, I have brought Gandhi spectacles DIY with you.

Round-framed glasses are one of the unique accessories we need to dress up kid as a little Gandhi.

Before, getting instructed to DIY, let us know brief history of Gandhi spectacles.

A word on Mahatma Gandhi’s Spectacles:

The glasses of Gandhi have a fascinating history. Gandhi bought his first pair in the 1890s when he was studying law in London. These glasses were more of an accessory, as he didn’t use it extensively. He started using his spectacles on an everyday basis in November 1921 during a fast in Mumbai while protesting communal rioting.

Interestingly, it was during the same time that he decided to give up Western clothes and moved towards handspun cloth- Khadi. 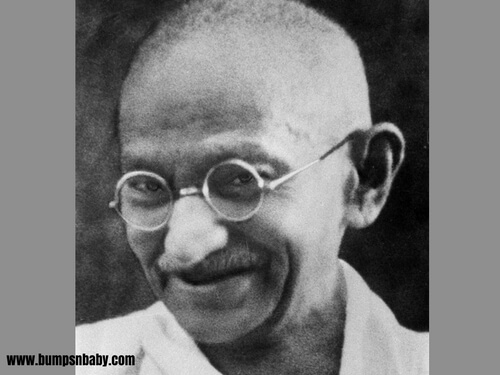 While the reason is unknown as to why Gandhiji choose the round frame, it can be said that the minimalistic design may be one reason. Also in the 1900s the round frames were the popular ones as they were cheap and easy to swap the glass lenses that were used back then.

His round glasses are so popular that it has been used frequently to represent characters that are physically weak but have strong personalities or intellect. Personalities like Steve Jobs have imitated the Gandhi glasses for this exact reason of minimalism coupled with a strong intellectual look.

Gandhiji’s eyeglasses were auctioned in Manhattan in 2009. The glasses were bought for 4, 188,363 rupees by Mr. Vijay Mallya. Isn’t every small thing interested about the person like Gandhi?

Let us go ahead with our DIY part.

This DIY is simple and you can use it to dress up your kid as Gandhiji.

Step 1: Take a piece of cardboard and draw round spectacles on it as shown. 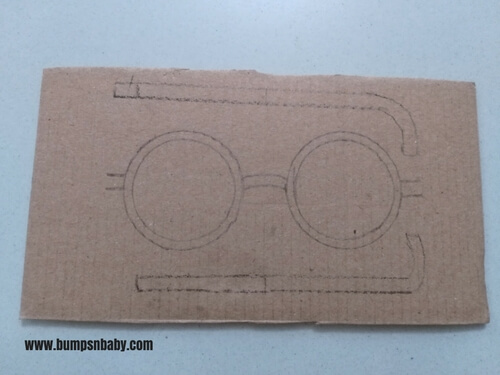 Step 2: Highlight the outline of the glasses with black. Colour both the sticks (only half way, as shown in the picture) of the frame in black. 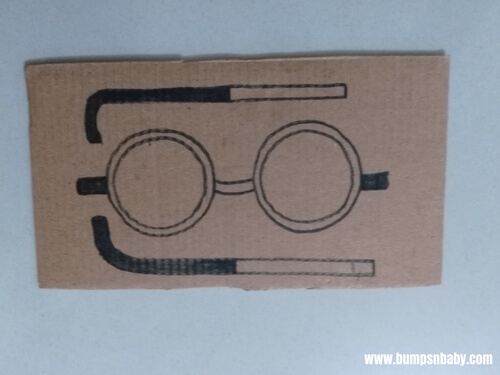 Step 3: Cut the frame with help of scissors.Now, use cutter to take out the inner circular part out of the frame. 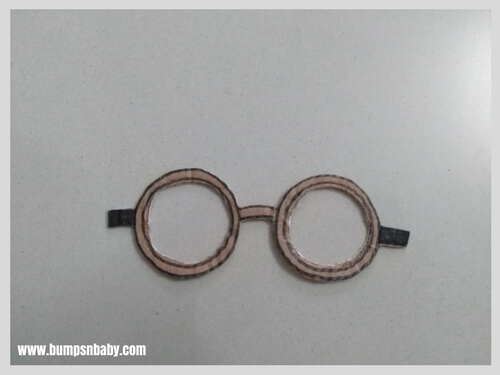 Step 4: Fold the sides of the frame inward as shown in the picture. 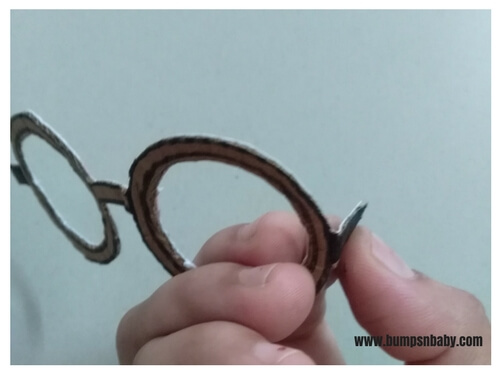 Step 5: Then, glue the sticks to both the sides of the frame. (shown in the picture) 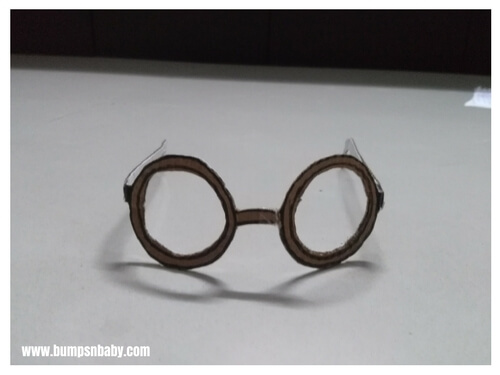 Step 6: Now, colour the frame into golden yellow colour (You can also stick the white paper over frame and color it with golden). 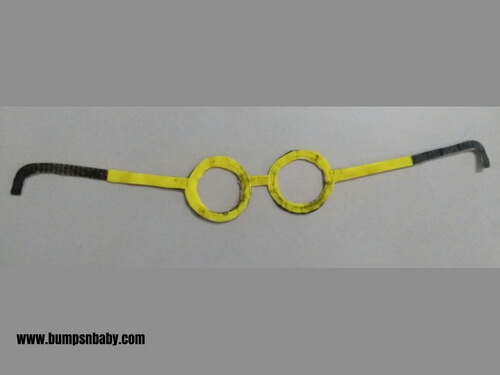 Do try this DIY Mahatma Gandhi spectacles and make your child wear this spectacles to give him a “Gandhi look”. You can also get a wooden stick, white dhoti, a bald cap and dress your child completely like Gandhi.

You can also try making a Mahatma Gandhi charkha model.

Let us inspire our kids not only to dress like him, but to acquire Gandhi attributes, too, on this special day.

Ask them which character of our father of nation inspires them the most? And, share their answers with us in the comment box.

Happy Gandhi Jayanti to all!!